The End of Internet Explorer – How Does It Impact Oracle Forms?

Internet Explorer Mode and Its Potential Flaws with Oracle Forms

Forms Standalone Launcher (FSAL) is a browser-less solution which allows you to run your Oracle Forms applications without needing to use a web browser. Users may be able to access the application by either running a command from Command Prompt or by running a CMD script on the desktop similar to the days when Oracle Forms was a client/server application back in the Forms 6i days. For future Oracle Forms releases, Oracle has stated that FSAL will eventually be the primary way of launching Oracle Forms applications. More information on how to set up FSAL may be found in our article here.

Java Web Start (JWS) is a more secure way of running your Oracle Forms applications compared to the now deprecated plugin option. With JWS, you can launch your Oracle Forms application by downloading or running a JNLP file using Java Web Launcher. There are a couple available options for running Java Web Start: from a web browser and from an already downloaded JNLP file. More information on how to set up Java Web Start may be found in our article here. In addition, information on how to run JWS in the web browser may be found here. 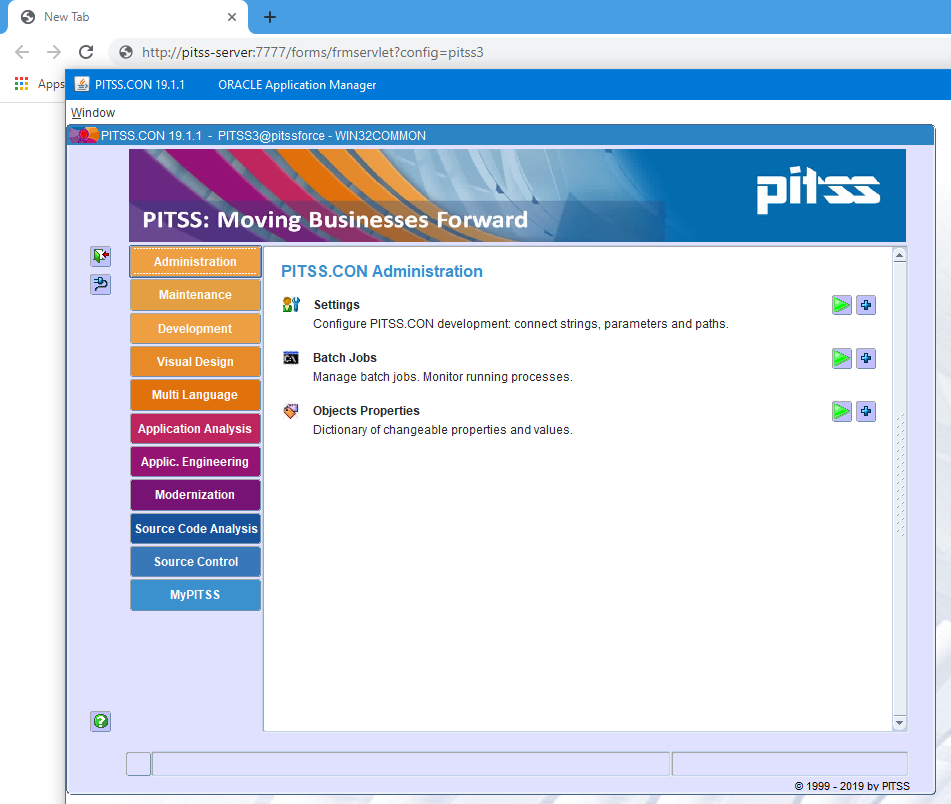 Unfortunately if customers are using Oracle Forms 10g or 11g, neither Forms Standalone Launcher nor Java Web Start are supported and configured with these releases. As a result, the best way to be able to continue running Oracle Forms is to upgrade to Forms 12c. PITSS’ tool PITSS.CON is able to easily analyze how much effort it will take to upgrade Oracle Forms from 10g or 11g to 12c. From there, PITSS.CON can quickly and efficiently upgrade all forms and reports to 12c so that customers may take advantage of using Forms Standalone Launcher or Java Web Start. PITSS has worked with numerous customers with their upgrading needs as quickly as possible.

In addition, other technologies such as Oracle Application Express (APEX) are alternatives to Oracle Forms which allow support with all modern web browsers. APEX is built on PL/SQL which is the same language used by Oracle Forms. PITSS.CON as well as PITSS’ new product, Forms Replacer Kit, are also able to assist with facilitating the migration efforts of an Oracle Forms application to APEX. One key thing to note is that any version of Oracle Forms (6i, 10g, 11g, or 12c) can be migrated to APEX. APEX applications are able to be run within any web browser including but not limited to Chrome, Edge, and Firefox. More information regarding Oracle Forms to APEX migrations may be found in our article here.

Please do not hesitate to contact PITSS today to learn more.