In the past two years, many web browsers such as Firefox and Chrome have de-supported the NPAPI plugin (see https://pitss.com/us/2017/03/08/oracle-forms-in-firefox and https://pitss.com/us/2015/04/16/oracle-forms-google-chrome for more information). The NPAPI plugin is used by the Java Runtime Environment (JRE) which the JRE is required to run Oracle Forms. As of July 2017, only Internet Explorer is able to run the NPAPI plugin as it no longer functions in Firefox and Chrome. It is also not available with Microsoft Edge, Microsoft’s replacement for Internet Explorer. As of right now, there are no plans for Microsoft to remove plugin support such as NPAPI from its Internet Explorer browser. However, Internet Explorer has reached its end of life, and it will only remain supported for as long as Windows 7, 8.1, and 10 remain under support. Therefore, end users should be able to continue running Oracle Forms using Internet Explorer for another few years. However, it is recommend to start planning a course of action to ensure your end users will be able to continue accessing your applications with little to no interruption.

Regardless of Internet Explorer support for the NPAPI plugin, Oracle will be depreciating the Java browser plugin when Java 9 is released. This will mean that in a future update to Java 9 (once it is released), the Java plugin will be removed from the JDK and JRE. However, you should still be able to use JRE 6, 7, and 8 if you need to use the Java browser plugin. Keep in mind that older versions of Java will not contain as many security fixes as the newest version. Therefore, it is recommended to only continue using JRE 8 and older (once Java 9 is released and certified for Forms 12c) until you are able to use a certified alternative to the Java plugin. This article will explain what you can do to gracefully move away from the Java browser plugin.

Depending on which version of Oracle Forms you are running, you may be able to try out some of the alternatives right now: 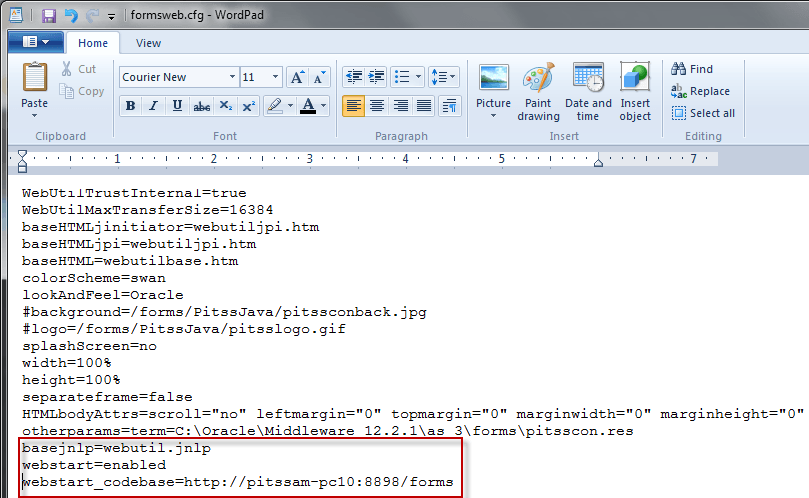 NOTE: When using Java Web Start, please keep in mind of the following:

As the article mentions earlier, Oracle Forms 12c is supported to use Java Web Start or JNLP. Similar to Forms 11g, Forms 12c uses Oracle WebLogic Server as the application server for running Oracle Forms. Oracle Forms 12c requires installing a new Oracle home as it is not possible to patch an older release on top of an existing Forms Oracle home. If you are upgrading from Oracle Forms 11g, the upgrade should only require an installation of the Forms 12c runtime environment and a recompile of your forms. However, PITSS offers a service where we analyze your Forms application using PITSS.CON to see how much effort it will be to upgrade your application from 11g (or even 6i or older) to 12c. Contact PITSS today to learn more how PITSS.CON can be an asset with your Oracle Forms upgrade.

If you would like to move away from using the Java Runtime Environment (JRE) altogether, you may also elect to move away from Oracle Forms to another technology. There are many different technologies available which Oracle Forms can be migrated to. Oracle has different platforms such as Oracle Application Express (APEX) and Oracle Application Development Framework (ADF) which can give your Oracle Forms application a more modern look-and-feel. PITSS has the expertise to help you migrate your application to one of these platforms as well as to many other platforms. Click here for more information regarding how PITSS can help you modernize your application today.

PITSS specializes in completely revolutionizing legacy Oracle Forms applications. Learn how we can help transform the applications that matter most to your business.