Starting in Forms 12c, end users have been able to launch their Oracle Forms applications without needing the insecure NPAPI plugin which has since been removed from all browsers except for Internet Explorer. With this, Forms 12c allows users to configure either Java Web Start (JWS) or Forms Standalone Launcher (FSAL) to launch their applications. However, when launching Oracle Forms in Firefox using Java Web Start, there is a known issue where the downloaded JNLP file cannot be run.

These steps will allow you to set up Firefox so that you may run the JNLP from Firefox:

1. Launch Mozilla Firefox if it is not already open.

2. Click the “Open menu” icon in the top-right corner and select “Options”.

Once you click the Open menu icons highlighted here, click on Options in the menu which appears.

3. While in the General tab, scroll down until you see Applications. Once there, locate the JNLP File entry.

The default setting is to “Always ask”. However, this causes a problem with trying to run a JNLP from Firefox.

4. Under the Action column, select the down arrow in the JNLP File entry and choose “Java Web Start Launcher”. 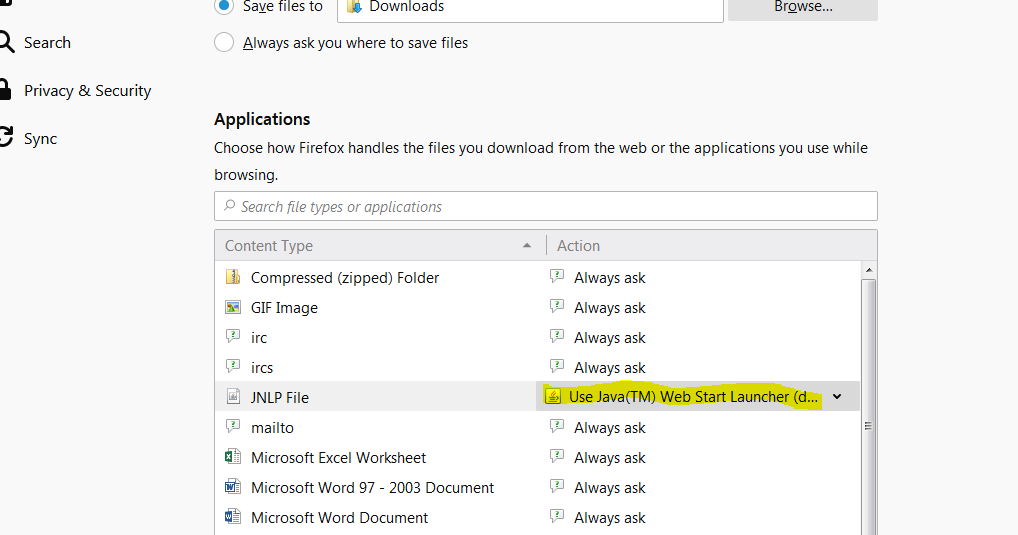 5. Exit out of Firefox completely and restart Firefox.

After completing the steps above, you should be able to download a JNLP file from Firefox to run your Oracle Forms application. You will now be able to run Oracle Forms in Firefox using Java Web Start.

Once you click OK in this pop-up, a JNLP window will be launched to run Forms.