NOTE (Added December 17, 2013, modified June 3, 2014): PITSS.CON 12.2.2 has been released. The newest PITSS.CON release contains the fix to the problem which consists of all PITSS.CON jar files signed with trusted certificates. PITSS.CON 12.2.2 functions successfully with Java JRE 7 Update 60. Please contact PITSS to upgrade your PITSS.CON version to the latest release. See the “Resolution” section near the bottom for more information.

For the most part, there is not much of a difference between Java 7u45 and 7u40 when it comes to running non-PITSS.CON related Forms applications.

However, when we try to run PITSS.CON using JRE 7u45, we get two Java security warnings similar to the ones you get when using JRE 7u40 with only minor differences: 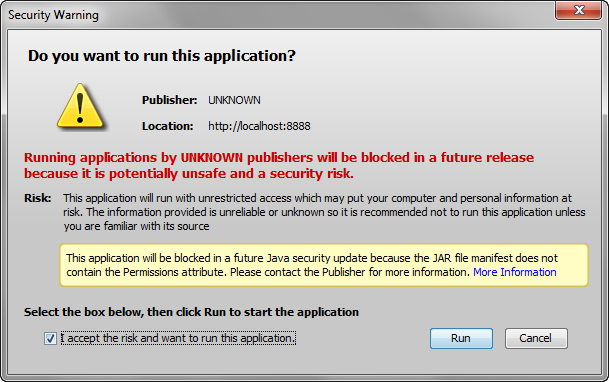 However, after clicking “Run” in both Java security warnings, PITSS.CON remains at a gray screen indefinitely. When we go to the Java console, we receive Java-related errors due to unsigned jar files: 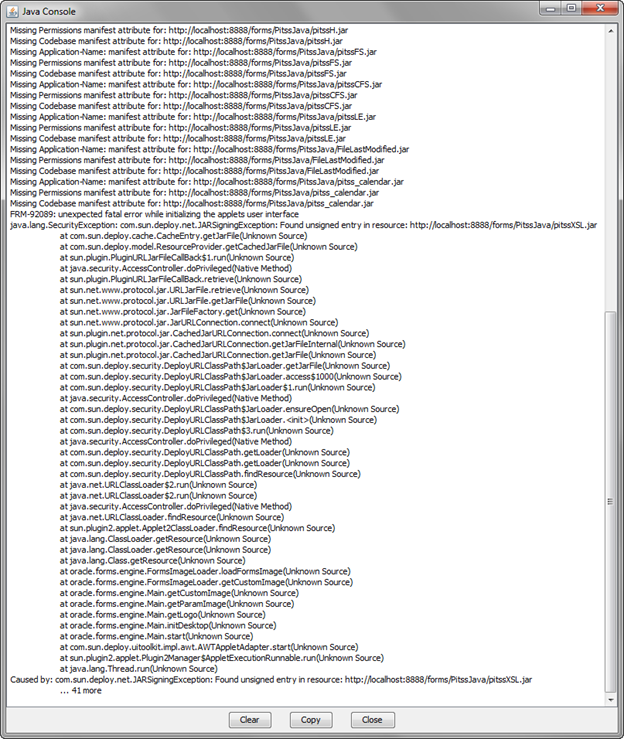 In conclusion, PITSS.CON will not run at all with the latest Java runtime 7u45. The Internet browser will remain at a gray screen indefinitely: 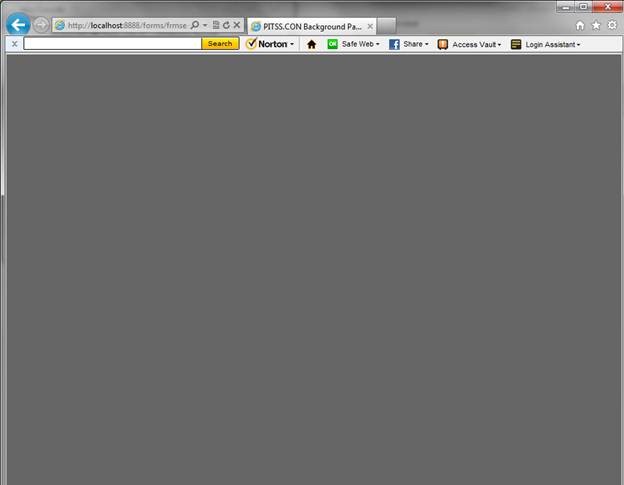 With the latest Java release, additional security measures have been taken with older Java releases. All Java updates before 7u45 are presented with the following message when they are used with PITSS.CON (or other Forms applications which uses Java during runtime): 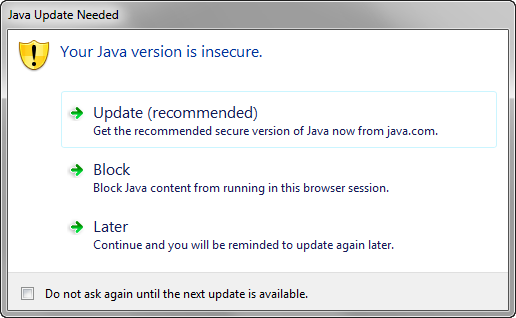 This message will appear for all Java 7 Runtime updates prior to 7u45. Clicking “Update (recommended)” will update you to Java 7u45 where clicking “Later” will keep you at the same Java Runtime level you are currently using.

No problems occur. Everything runs fine in PITSS.CON (the PITSS.CON Editor comes up) regardless of the security settings in the Java Control Panel. NOTE: If you are using Java 7 Update 21 and the PITSS.CON Editor does not work, please see our knowledge base article https://pitss.com/us/2013/10/09/unable-to-open-pitss-con-editor-when-using-java-runtime-7-update-21-or-higher/ which addresses this issue.

With the default Java console settings, PITSS.CON does not come up at all after receiving many blocked Java application errors such as: 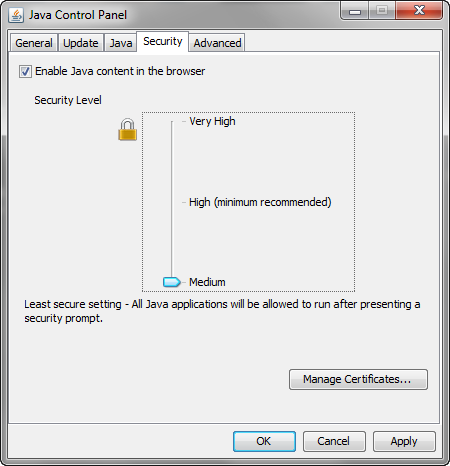 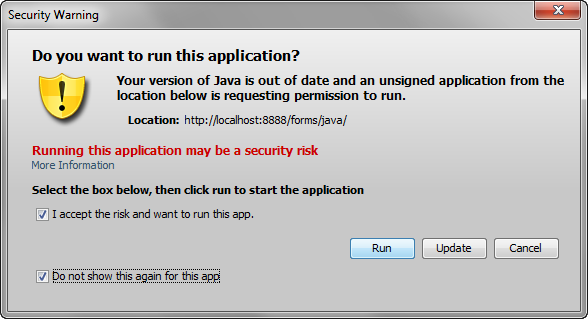 Fortunately with JRE 7u25, we’re also given an option to have the warning above to not appear again. However, changing the security settings from High to medium is not recommended as it could present possible security risks if an end-user runs anything with Java outside of PITSS.CON or his/her Forms application.

We receive the same warnings as we do with Java 7 update 25. We also get the following message: 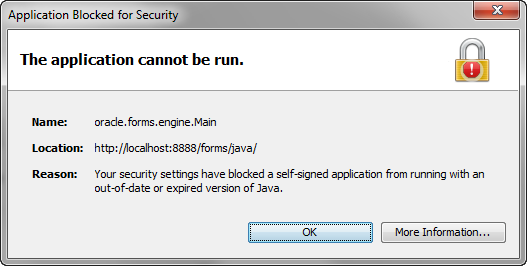 However, PITSS.CON is able to be used. The only difference is that the PITSS.CON Editor does not work.

When we change the Java Control Panel security settings from High to Medium, we get the original Java security warnings along with this new message: 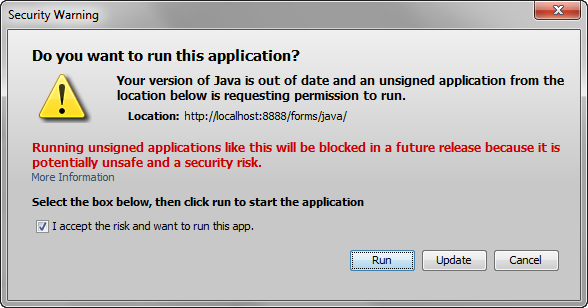 The end result is that this is similar to using the Medium security settings in the Java console as what is done with Java 7 update 25. When we click the check box and click “Run”, PITSS.CON runs perfectly, including the PITSS.CON Editor. The only difference is that the warning message will always appear and you do not have the option to not have it appear again.

As mentioned at the top of the page, PITSS.CON does not work at all regardless of the Java Control Panel security settings.

PITSS.CON Version 12.2.2 has been released on December 17, 2013. Please upgrade to the latest and greatest version of PITSS.CON which contains all PITSS.CON jar files signed with trusted certificates. After upgrading to PITSS.CON 12.2.2, PITSS.CON will run on the latest Java 7 JRE (including the JRE 7 Update 60).

After upgrading to PITSS.CON 12.2.2, instead of Java security warnings, you will see the following Java notification: 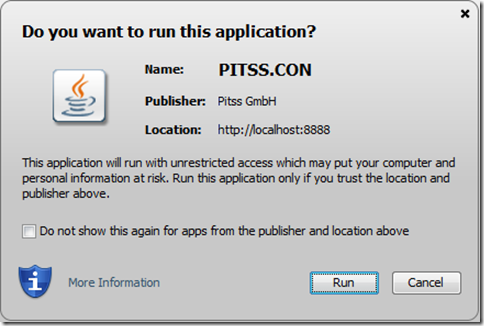 This time, PITSS.CON is now signed with a trusted publisher. To eliminate this message from appearing, simply check “Do not show this again for apps from the publisher and location above”.

NOTE: If you have already deployed jacob.jar in %ORACLE_HOME%\forms\java, you will need to replace it with the one in the PITSS.CON directories. You can do this by:

PITSS.CON Releases Affected: All PITSS.CON releases up through 12.1.3 (version 12.2.2 is the first version where the Java security warnings will no longer appear).